A Foodie Revolution is Underway in Victoria Falls 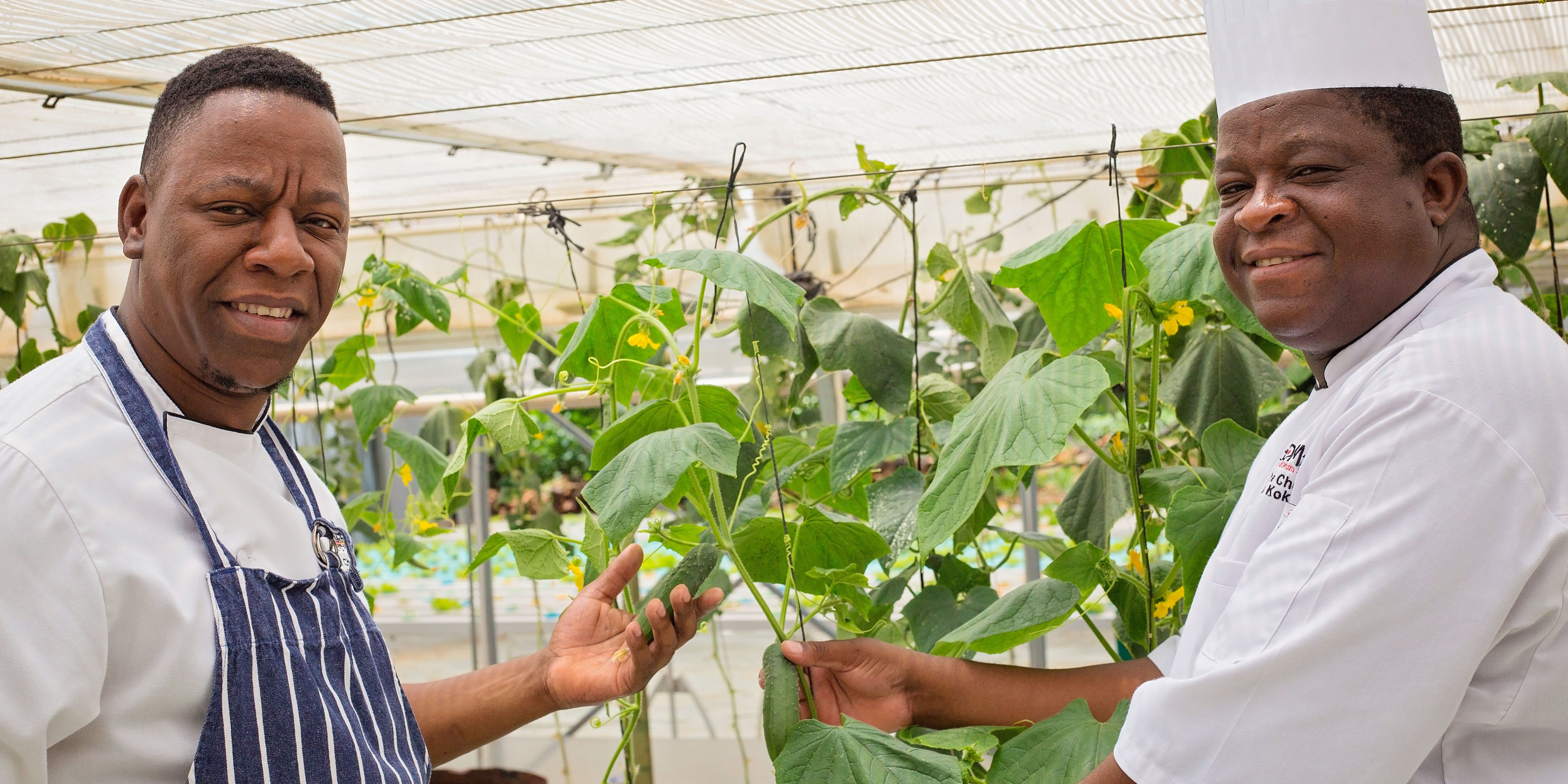 A Foodie Revolution Is Underway in Victoria Falls!

There is something cooking in Victoria Falls … and it smells good!

Over the past months, Zimbabwe’s once again busy tourist destination has been undergoing something of a foodie revolution – in addition to many exciting new eateries opening their doors, several chefs with impressive international experience have brought their skills to town.

Newcomers to Victoria Falls include Dean’s, Three Monkeys, The River Brewery Co. and Pariah State, while Stanley & Livingstone Boutique Hotel have opened their restaurant to the public, and many existing restaurants are revamping their culinary offerings.

Among the new chefs to descend on the tourist town is Simba Musiyiwa, Victoria Falls Safari Lodge’s executive chef, and Thomas Koke, The Boma – Dinner & Drum Show’s executive chef, who both began their roles in October.

On March 1 new menus will be launched at MaKuwa-Kuwa Restaurant and the Buffalo Bar, which Chef Simba says will introduce many exciting new dishes, with the focus being on seasonality, regionality and consistency. 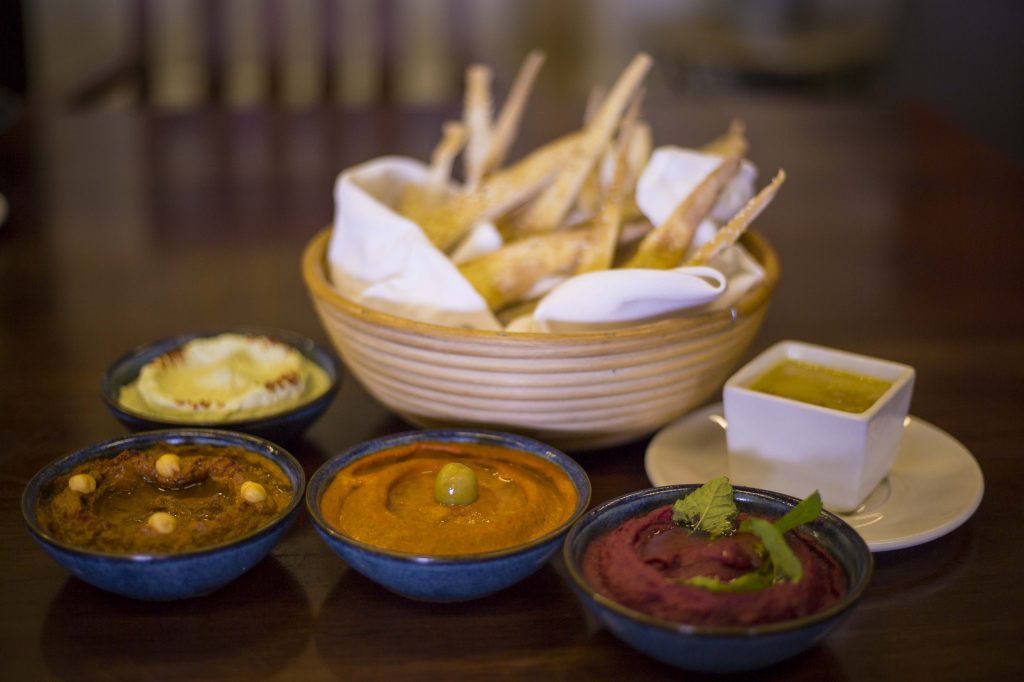 “The new menus will be playful, featuring thoughtfully sourced ingredients, so more local produce, in addition to incorporating global trends, and aiming to have a bit of something for everyone,” Chef Simba says. The Bulawayo-born, Gweru-raised chef, who is overseeing the Victoria Falls Safari Lodge’s MaKuwa-Kuwa Restaurant and the Buffalo Bar, as well as the Victoria Falls Safari Club restaurant, is passionate about the “farm to table” concept.

“We are embracing the ‘farm to table’ concept, so knowing where our produce comes from, and supporting local suppliers rather than relying so heavily on South Africa. Produce is going to be carefully sourced and thoughtfully served.” 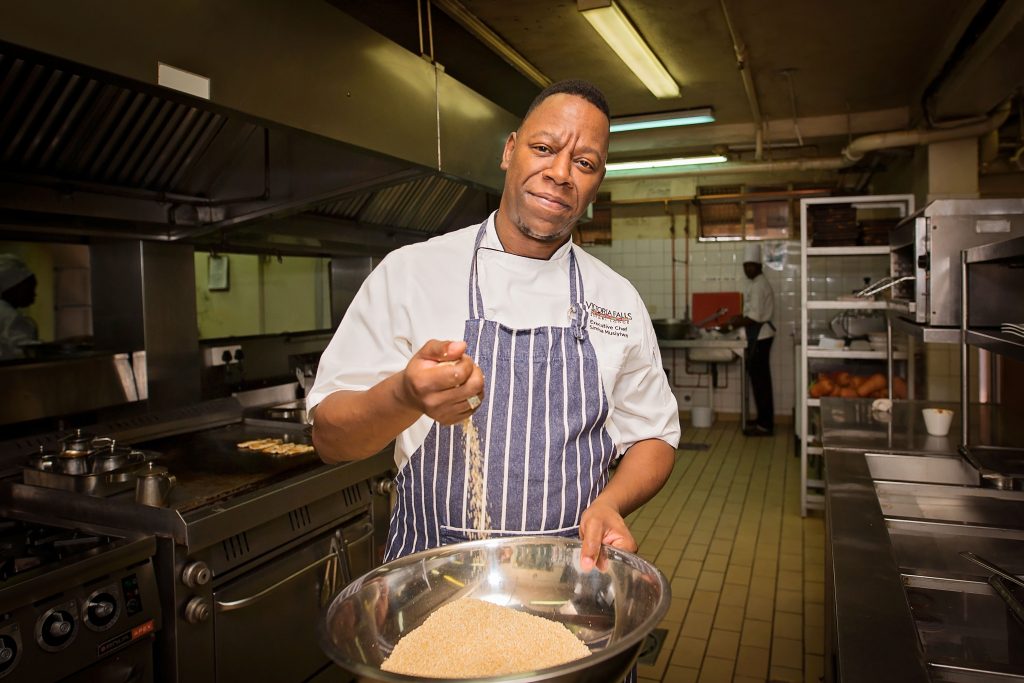 Chef Simba, 37, who trained in Harare, and has worked at Four Seasons Serengeti Lodge in Tanzania, Singita Pamushana Lodge in southern Zimbabwe, and Cape Town’s Jardine Restaurant, hopes to help raise and modernise the culinary scene, not just in Victoria Falls, but in Zimbabwe.

“In Zimbabwe we don’t really have our own kind of culinary identity in a way, which is sad because our neighbour South Africa has so much going for it,” he says.

“We have a three-year chefs’ trainee programme here, and after they finish we take a lot of the trainees into the kitchen, which is good because we keep getting revitalised by this youth. My goal in being here, is really trying raise the bar on our food identity in Zimbabwe.

“The fact that we are getting young students into the programme is exciting because I feel like we are passing on the baton. My passion for cooking is not just about Victoria Falls Safari Lodge, it’s about opening it up for the whole country, to get our food to a level where people say, Zimbabwe has something. So that’s the passion and the dream.”

Since his arrival, new systems have been put in place in the kitchen, staff training has stepped up, old equipment has been thrown out, new equipment installed, and renovations will soon begin to extend the pastry kitchen. 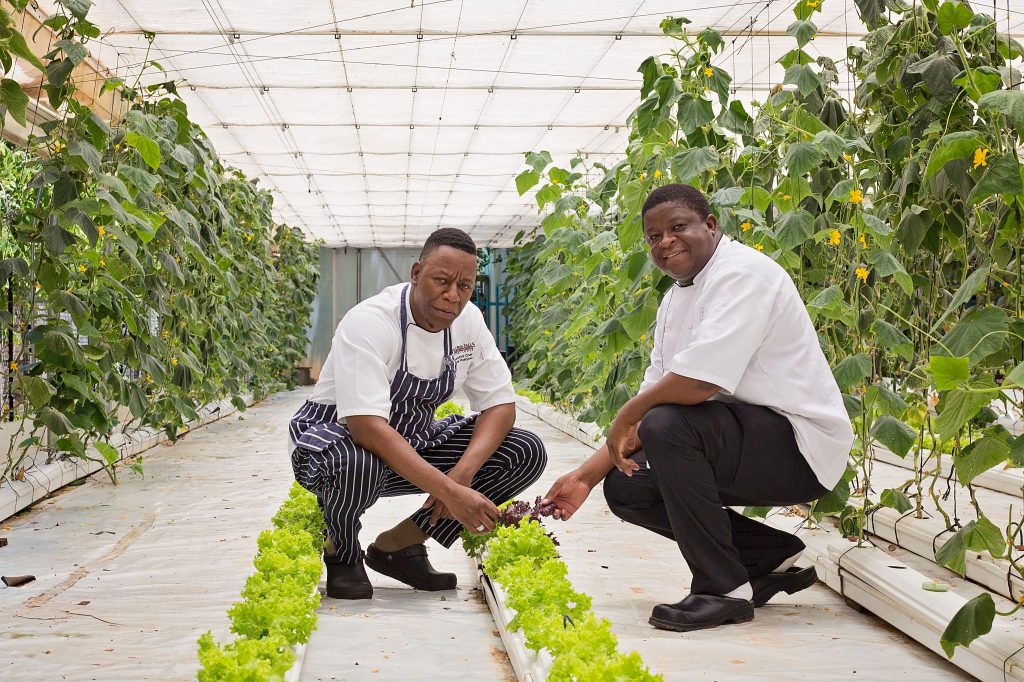 Previously Chef Thomas worked with the Anantara Group, where he set up an African-themed restaurant on a private island, cooking for VIPs, from global football star Cristiano Ronaldo and his family to the Sheikh of Abu Dhabi and the princes of Saudi Arabia.

Highlights in Dubai also included receiving an award from the Government for leading an environmental campaign and making the Guinness World Records for being a part of a team of more than 3,800 chefs to make the world’s largest dessert.

He also spent three months in Australia gaining a diploma in hospitality management through the Institute of Hospitality Management.

Born in Gokwe, Chef Thomas came to Victoria Falls after finishing school, working initially as a tracker, a canoe guide and then a pot washer, which is when his interest in cooking developed, and he decided to be a chef.

After completing a National Certificate in Cookery at Bulawayo Polytechnic, and later working as chef de partie at A’ Zambezi River Lodge he discovered dried herbs were being used, which he hated, so he created a herb garden behind the kitchen.

He then worked as a senior chef at The Boma, leaving in 2008 to take up a role at Holiday Inn, which was just launching in Dubai, working his way up to executive chef, before joining the Rotana Hotel Group, and later Gourmet District – a high end, 300-seater restaurant. 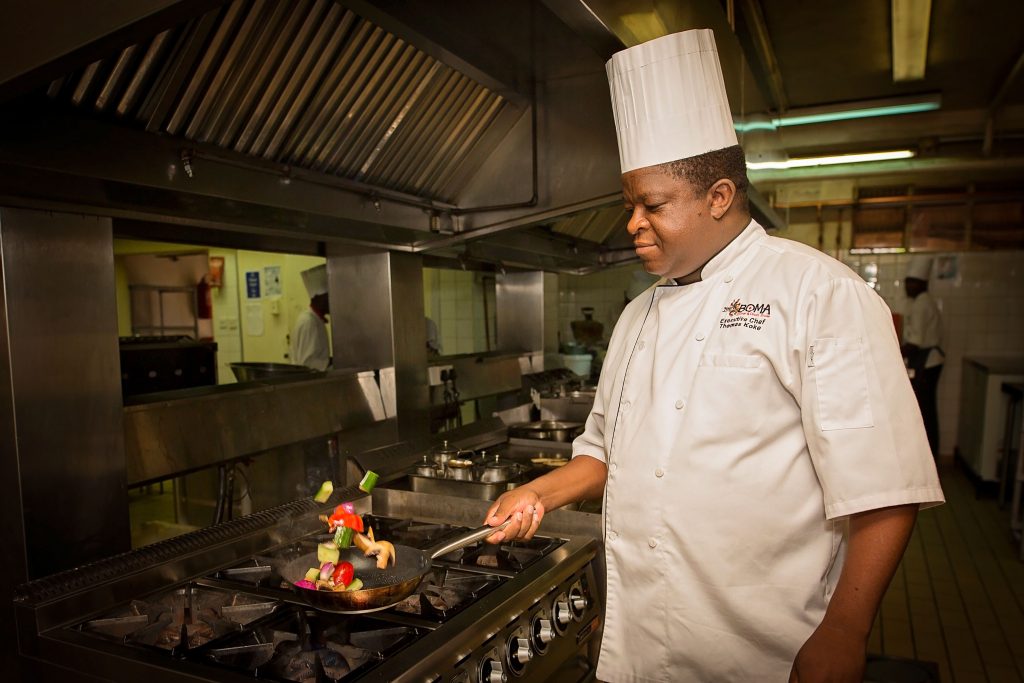 Chef Thomas at work in The Boma kitchen

Like the Victoria Falls Safari Lodge, The Boma is also about to undergo a back of house facelift, with an upgrade and modernisation of the kitchen and serving areas to commence in coming months, while maintaining the integrity of the guest experience.

Chef Thomas’ culinary style is all about authentic food, so being true to a dish, and he is revisiting recipes and is intent on enhancing the menu and the entire Boma experience, which includes a focus on staff training – from serving guests, to personal grooming, smiling and cooking with love.

Changes so far include offering guests non-alcoholic “mahewu”, as an alternative to “chibuku” – both are traditional African brews, popular in Zimbabwe. In addition, beef short ribs, venison steaks and oxtail have been added to the meat selection, and koeksisters, baobab mousse and pumpkin crumble to the dessert bar.

He believes the Victoria Falls culinary scene still has some way to go, but like Chef Simba he wants to shake things up, not only in his immediate sphere, but across the country through training, influencing and inspiring the next generation of chefs.

“I’ve achieved most of my personal goals, and I want to help others achieve theirs.” 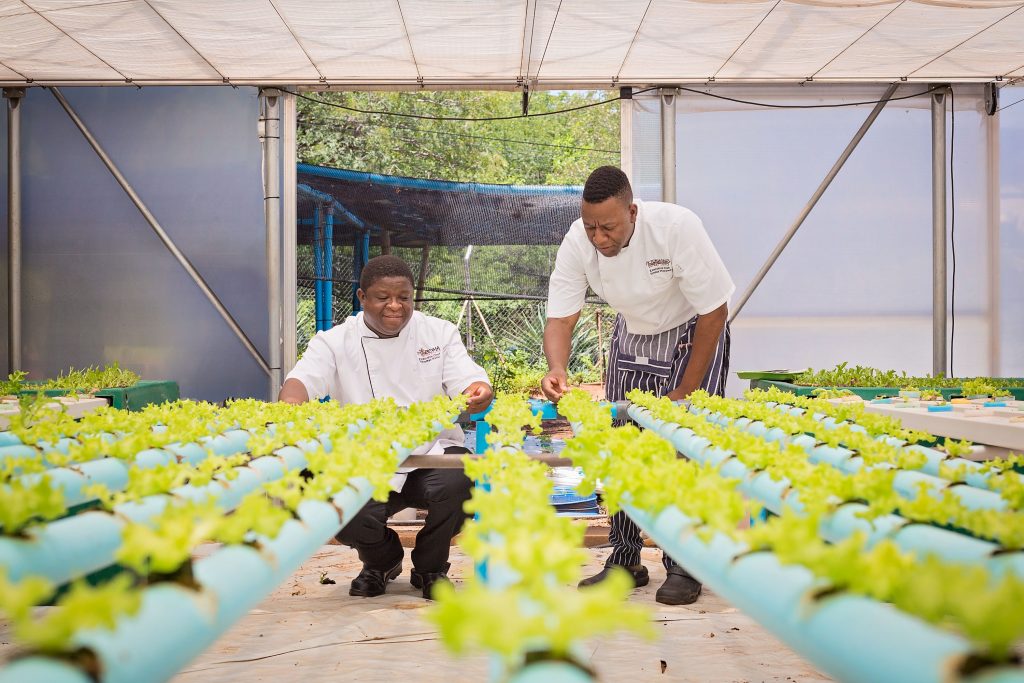